The first archaeological discoveries date to 7000 BC,  yet pottery thrived initially in the Early Minoan period (3000-2100 BC) and came to its peak in the Middle Minoan period (2100-1600 BC). It is interesting that rather than associate absolute calendar dates, archaeologists use two systems of relative chronology for the Minoan period. One of them is based on pottery styles.

The ceramics of the ancient Minoan period (3000-2100 BC) are red with a coating of enamel and are decorated mainly with linear patterns, either in dark colours and bright font or brighter colours in dark font. In contrast, the ceramics of Middle and Late Minoan period (2100-1200 BC) are thinner and have elegant handles. The decoration is finer regarding to colours and painted patterns. More specifically, these are colourful ceramics with perfect combinations of drawings of animals and plants: flowers with a long stalk, aquatic plants, anemones, fish and animals. The lines are fine and natural and decorate the so called kamaraika ceramics. The adjective “kamaraikos” derives from the site where these ceramics were found for the first time in Crete, the Kamares cave, at the southern edge of Mt Psiloritis.

Thanks to the big demand for Cretan ceramics, during the Late Minoan period their production developed into a real business and a lot of them were found in excavations in Egypt, Syria and Greece. 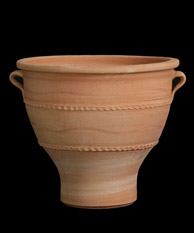 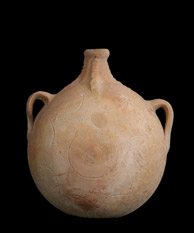 Traditional use: People used it as a container where they carried a little amount of wine or water. They tied a rope from the two holders, so that they could hang it. 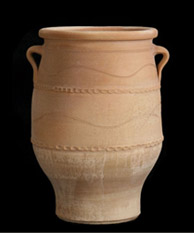 It is the typical piece of pottery of Thrapsano.